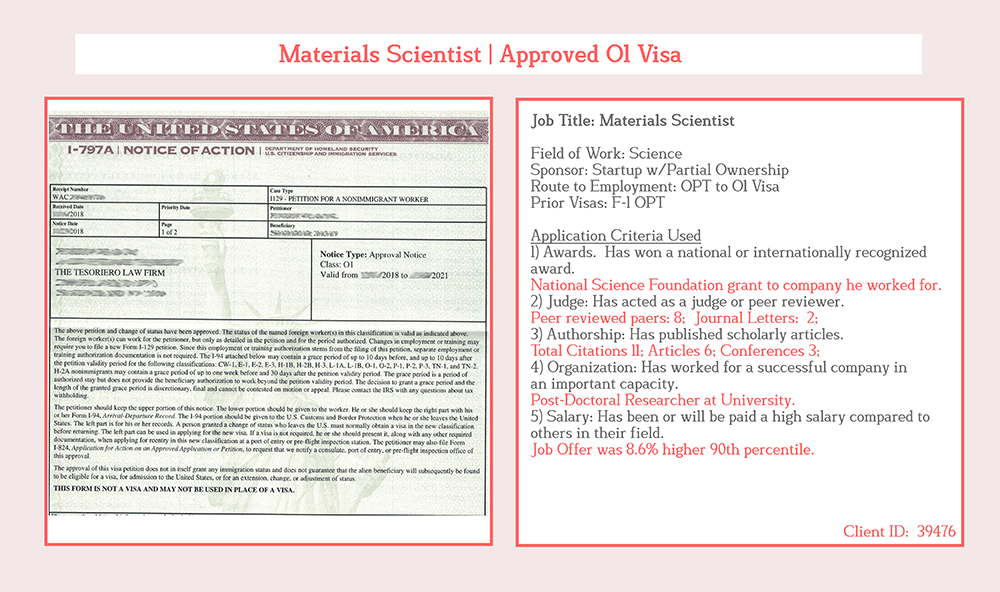 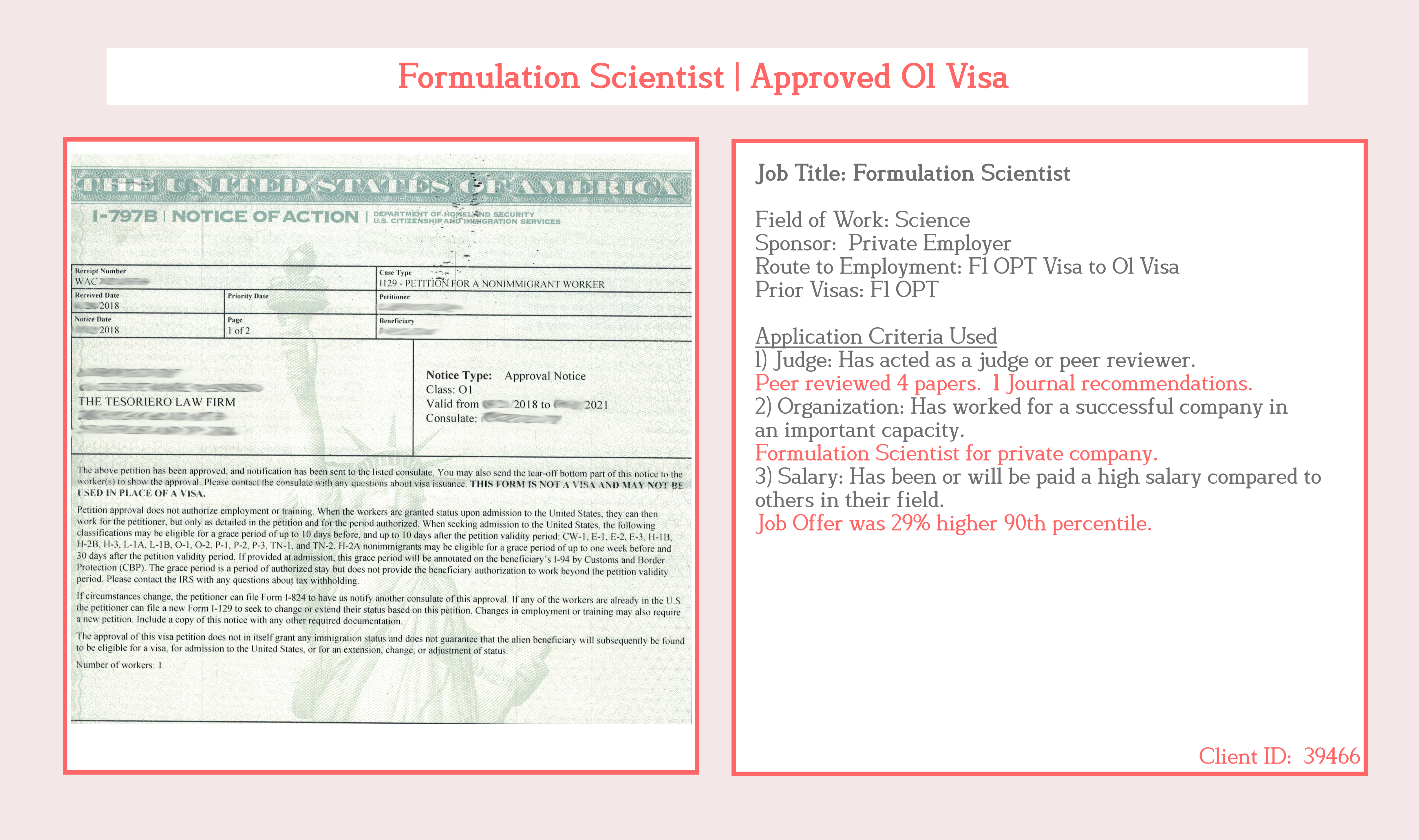 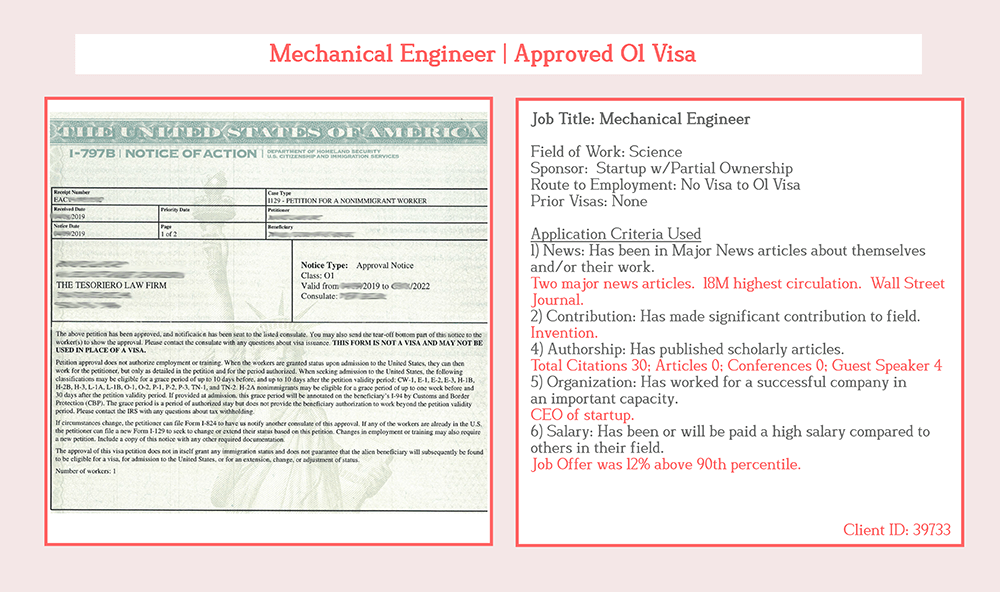 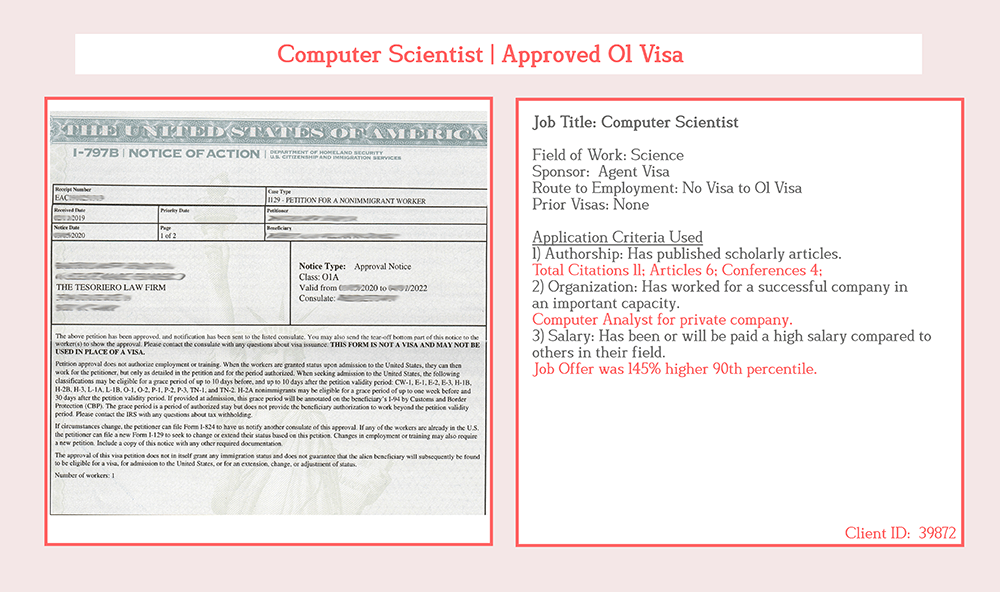 O1 Visa For Scientists: How to get one and what it is

A Scientist must show that they meet at least (3) of (8) criteria AND have a job offer. However, most Scientists meet the same 3-4 criteria when applying. It's important to remember that the criteria are a checklist and not a "weighted" system. Once you meet three, you're in. A person who meets 3 criteria gets the same visa as a person who meets 8 criteria. Further, meeting a criteria is a pass/fail endeavor, and there is no credit given for partially fulfilling one.

Which O1 Criteria Scientists Should Focus On

Let's look at the criteria that a Scientist usually applies under. The first two criteria, Authorship and Organizations, are met by most scientists. The criteria below that, Judge, Salary, and Associations are the other criteria that Scientists usually apply under, although rarely for all of them in the same application. Beneath that is the final criteria that is possible, but very rarely applied for by scientists: Awards, Contribution, and News Media.

Overview of how O1 Visa Applies to Scientists

Scientists are eligible for an O-1A Visa in the Field of Science. O-1A Visas are a sub-type of O-1 Visa, available to those seeking to work in the field of Athletics, Business, Education or Science. An O1 Visa for Scientists is categorized in the Field of Science. The other type of O-1 is an O-1B Visa, which is for artists. The criteria for an O-1A Visa is different from that of an O-1B, although they do have some similarities. It is important not to rely on generalized "O-1 Criteria" from internet sources as they are likely regarding O-1B visas, which do not apply to Scientists.

All foreign Scientists and Researchers are potentially eligible for O-1 Visas. Most applicants are transferring from a OPT, J-1, or an H-1B Visa to an O1 Visa. Sometimes they are recruited to a company from overseas. To achieve an O-1 Visa a Scientist must meet 3 of 8 criteria listed below AND have a job offer from a US Employer. The O-1 Visa allows a holder to work and live in the US for three years, and can be renewed indefinitely. Due to the extensive procedural requirements of the O-1 Visa, using an experienced O-1 Visa Attorney is highly recommended.

There is a Green Card "version" of an O-1 Visa called an EB-1 Visa, which you can apply for at a later time. The EB-1 lasts for 10 years and leads to citizenship. Our lawyers handle both O1 visas and EB1 greencards.

Transfer to the O1 Visa